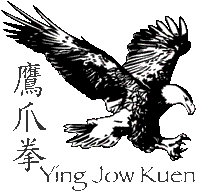 In training, an emphasis is initially placed on the development of a strong kung fu foundation such as stance work, root, striking, kicking and so forth. Most of these foundational skills will be applicable to other styles associated with the Ching Mo schools (and in fact, some basic Ying Jow forms are Ching Mo forms), and even more generally to many other Northern Sil Lum (Shaolin) styles. Without a strong foundation, the application of skills, advanced or basic, is not possible.

Areas of training include forms, techniques, principles, combinations, stance work, partner work, iron training, weapons, locks, chi gung, tumbling and fighting. Physical conditioning is also part of the overall training regimen. Note that the conditioning is specific to Ying Jow and different than that of Baiyuan Tongbei and Xing-Yi.

Ying Jow Kuen is a Northern Shaolin kung fu style known for gripping, joint locking, takedowns and pressure point strikes. Ying Jow Kuen arose from the hand locking techniques developed by the famous General Ngok Fei, combined with Faan Tzi, known for it's kicks and legwork in particular. This was accomplished by the monk and Faan Tzi master Lai Chin. He originally called it Faan Tzi Ying Jow Pai, then it became known Buk Ying Jow Kuen, or simply Ying Jow Kuen. It is also known as Ying Jow Pai or Bak Ying Jow Pai. The famous Ying Jow master Chan Tzi Ching helped establish the first Ching Mo Association in Shanghai, and since then Ying Jow has been among the styles associated with that school.